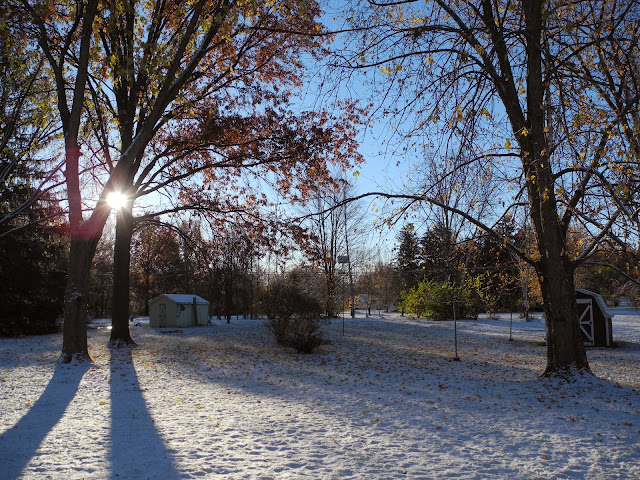 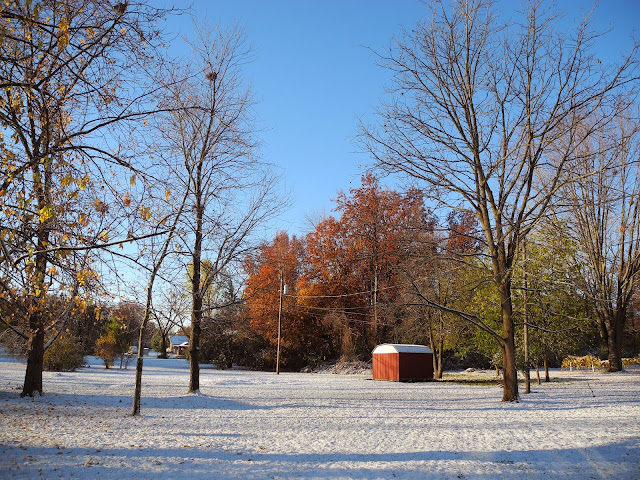 Goodmorning, everyone! Look at this! Last night we had our first snowfall of the year and it stuck. This has never happened in my memory and it was so exciting. It'll all be gone in a few hours but I'll enjoy it while it lasts!

I think I'm going to take advantage of our sunshine to turn on some good music and get some work done. I'm off to take photos of our reassembled bathroom while the light is good. Wish me luck! 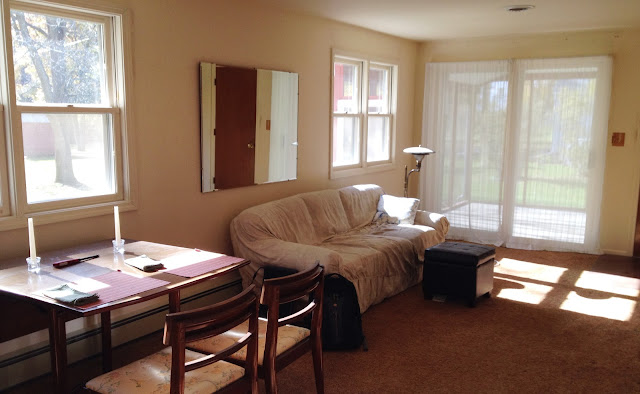 Our backroom on a sunny afternoon. I love southern windows.


Happy Tuesday, everyone! Today is my day with the car and that makes it shopping and errand day for me. I love getting to stock up on yummy foods and new library books every week. This week I picked up a couple of books and three cds! I can't wait to cook supper tonight with a new-to-me cd in the player. It's going to be a very good night! 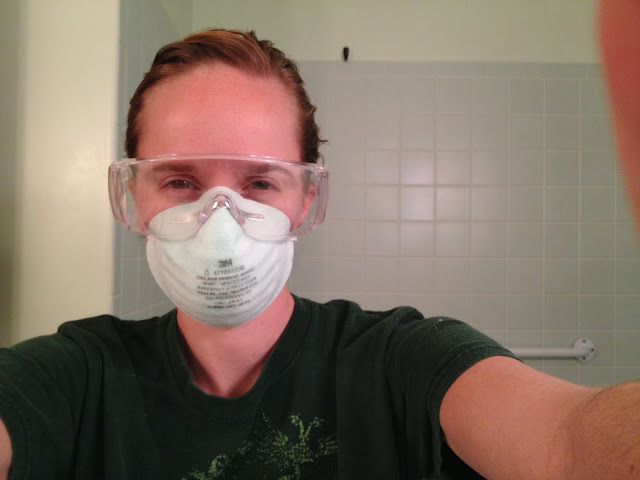 I spent a lot of the past week looking like this

This past week was all about walls! Well, and about ceilings too. It started with this: 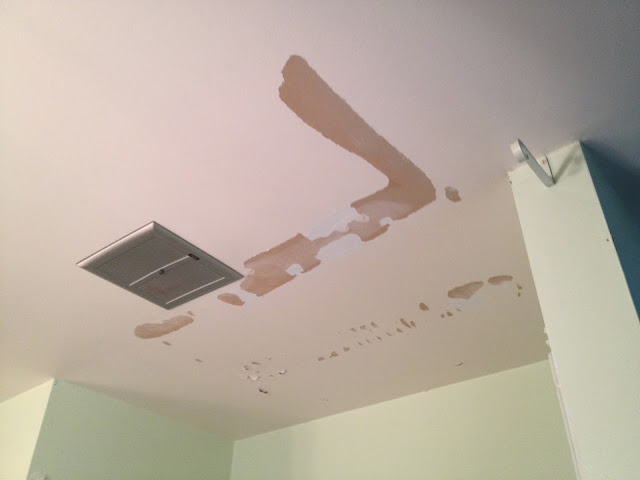 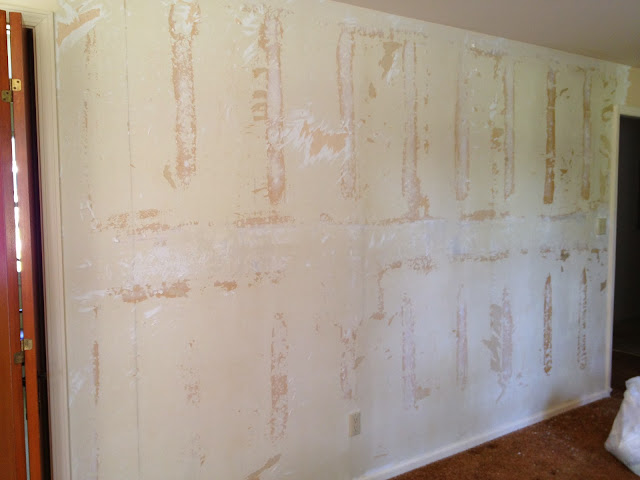 And ended up with this: 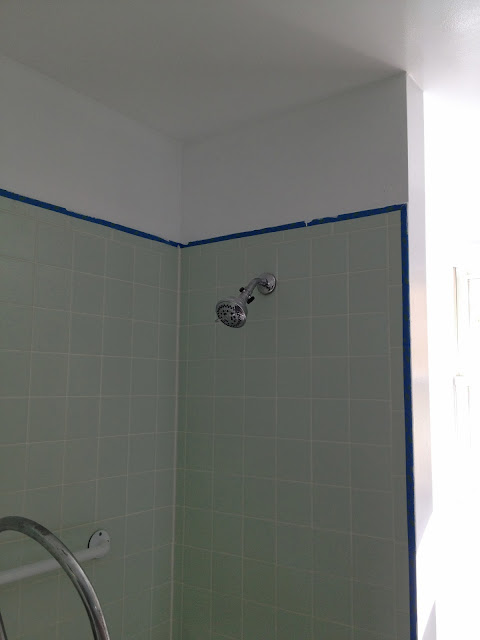 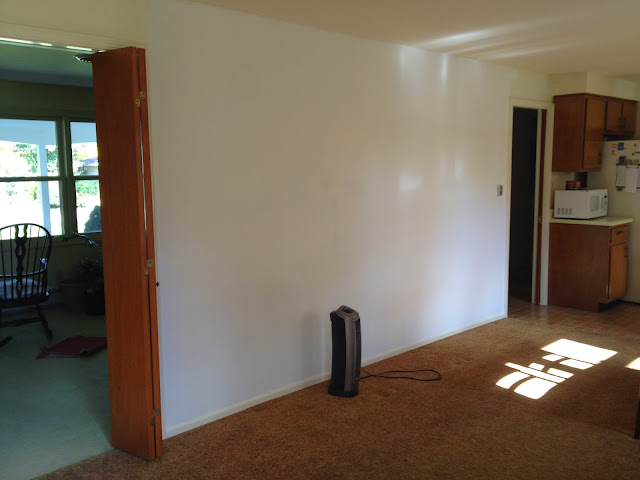 What all we did this week:
The weekend of October 26th & 27th we finally had a chance to start in on the bathroom ceiling. It was peeling and flaking before we moved in and had only continued to get worse. While Justin was at work on Friday I scraped the ceiling and got off ever bit of flaking paint and got the area ready for us to skim coat. After supper we got out the joint compound and mixed up a batch of skim coat and put the first layer on the ceiling. It went a lot faster and more easily than we thought it might. 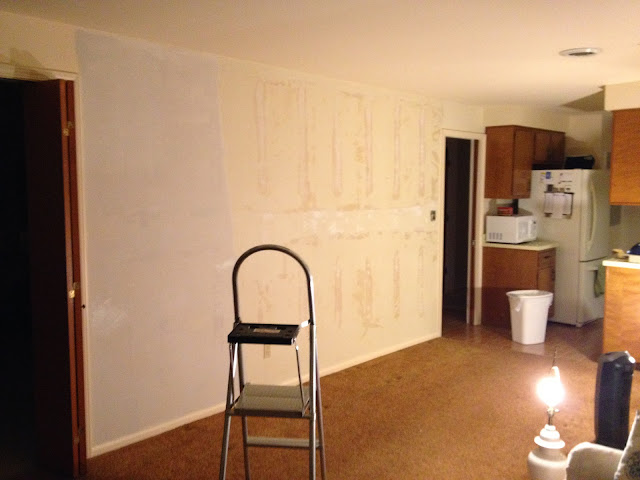 Justin had to work at 6am on Saturday morning so I decided to tackle the first coat of the big wall. After about 3 1/2 hours I had run out of joint compound. 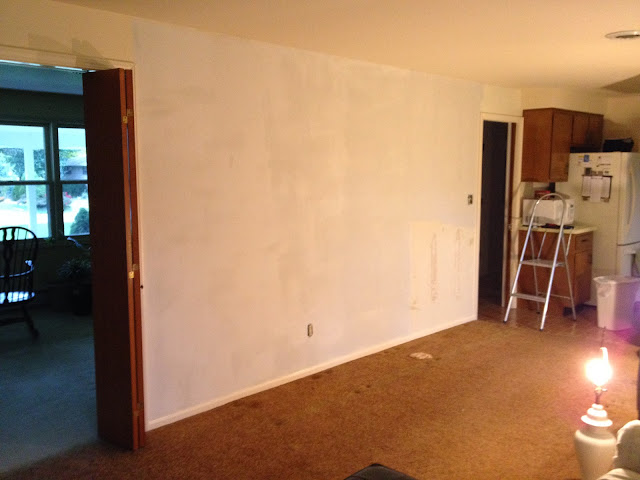 See the corner that didn't get finished?

Justin bought me more joint compound on his way home from work and Saturday afternoon I finished my little patch.

Sunday, after 24 hours of hardening, Justin sanded the ceiling in the bath and the big wall. After we had cleaned up the huge mess we mixed up more skim coat and put a second coat on the bathroom ceiling and wall. 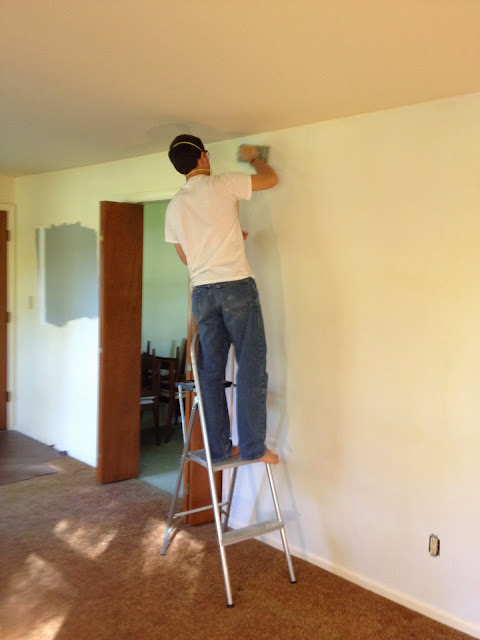 Monday, I spackled holes in the bathroom and patched the corners where the joint compound had chunked out. I also started patching areas in the kitchen and entry way. There's still plenty more to do but it's a start.

After Justin got home from work he sanded the wall again and it is crazy smooth. It's going to look lovely after it's painted!

The wall again. Isn't it gorgeous?!

And then this weekend, Nov 2nd & 3rd. We painted the bathroom! We decided to go with Zinnser Perma-White which is a mold and mildew proof interior paint. I'm sure it's full of all kinds of noxious chemicals but since this bathroom has humidity problems that we can't fix at the moment we decided to go with it. 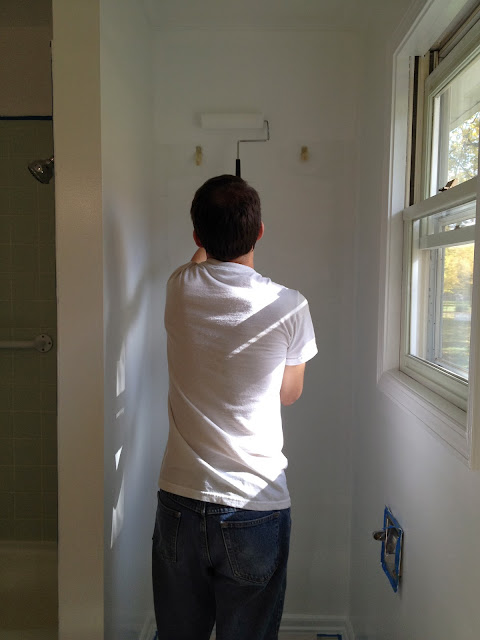 Justin putting on the second coat of white.

As you can see from the pictures at the beginning of this post, the walls previously were a pale green that didn't quite match the tile in the bathroom. What you can't see is that not only were the walls the pale green but so were the trim, window, and radiator. (We also learned that the bathtub and toilet used to be the same color green as the tile. We're really glad those were replaced before us though.) Since the tile is in good condition and we won't be replacing it anytime soon, we decided to just go with pure white for everything else. So that meant very little taping! But it also meant lots and lots of brushwork. I'm still not quite done ;-) Once I've finished up the last bits of painting and we've gotten a couple of other small projects done, we'll put the room back together and I'll take proper after shots of the bathroom. Look for a before and after post in a couple of weeks!

For anyone planning to take on a similar product:

This was the most helpful tutorial for skim coating that we found. As a whole, I found that skim coating isn't difficult. It's just tedious. And the sanding really really sucks. It makes a huge mess. But it's not hard. Just make sure you have a dust mask and saftey glasses.

And this is the paint we used. It's not expensive, about $25 for a gallon, and it went on well and has a very mild smell. Our light colored bathroom only needed two coats and we'll have used most of the gallon by the time I'm finished. I think we made a good choice.