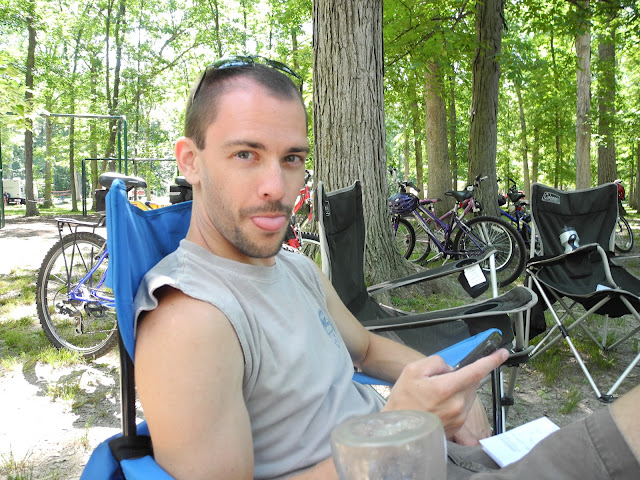 Sometimes, I look at the lives of my friends 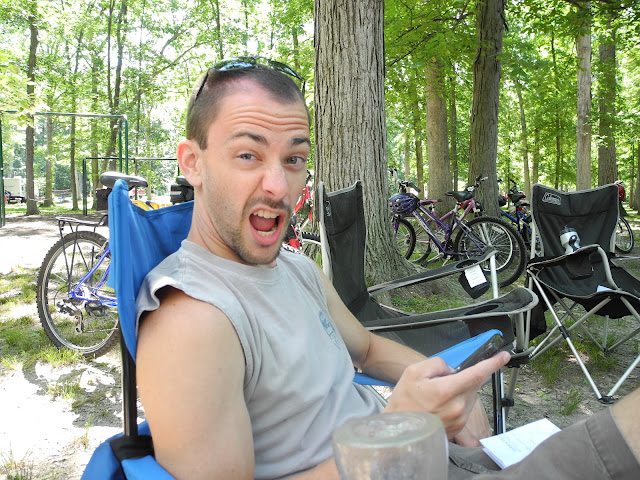 and see their exotic travels and crazy adventures 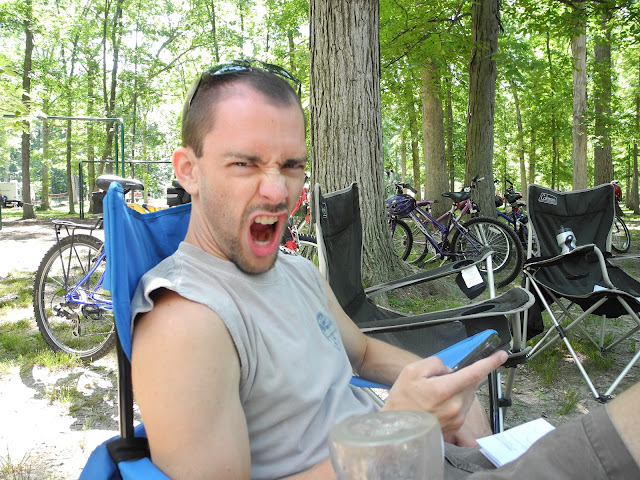 and I get jealous of them, 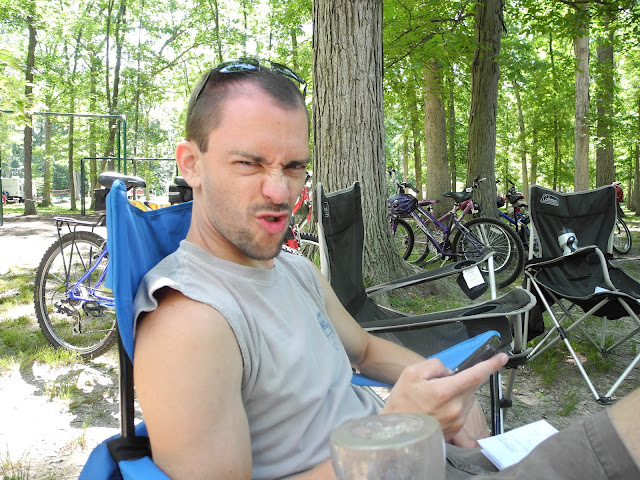 but then I think of everything I would have missed out on, 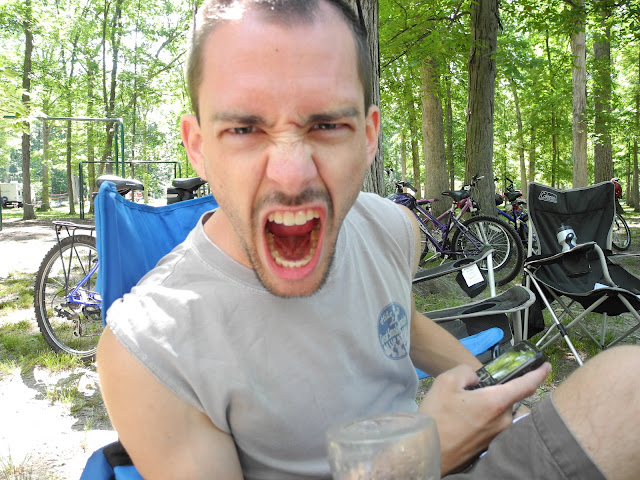 and would have never experienced. 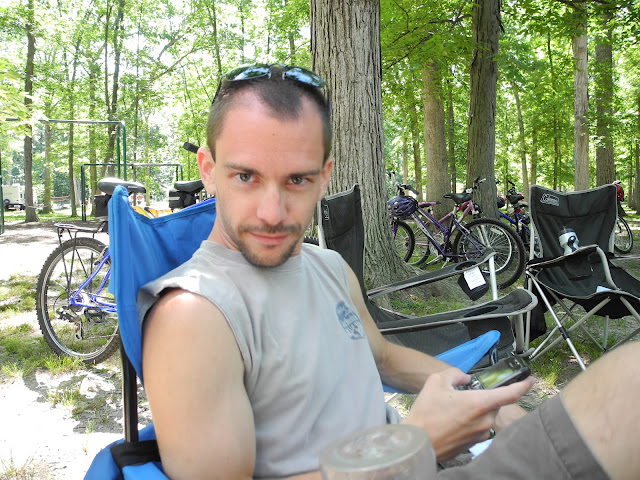 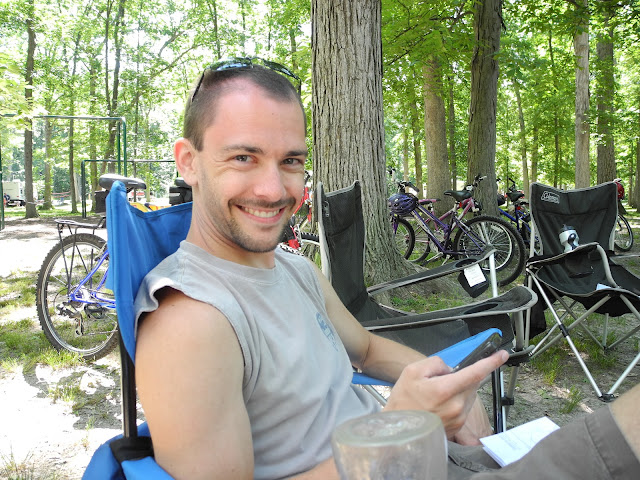 I just feel sorry for them instead.


P.S. Happy birthday to my wonderful husband, the most amazing best friend and lover a girl could ever wish for.

Posted by Unknown at 9:00 AM No comments:

This was a really good race. It wasn't a perfect race for me certainly but I really enjoyed it. It was well organized and executed by the directors. And it was very reasonably priced. $18 apiece. How can you beat that? I would definitely run more races by this organization. 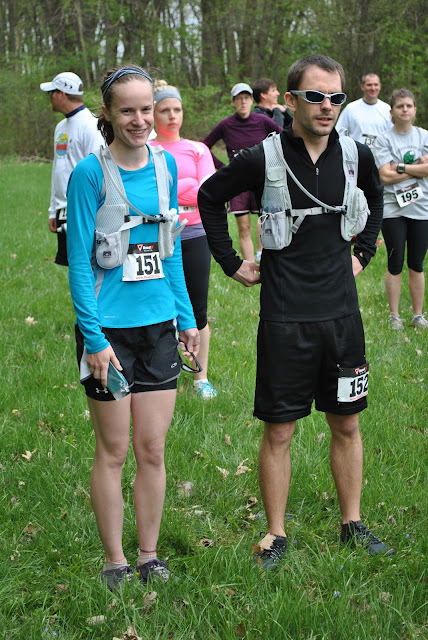 Justin and I before the race. This is classic us. 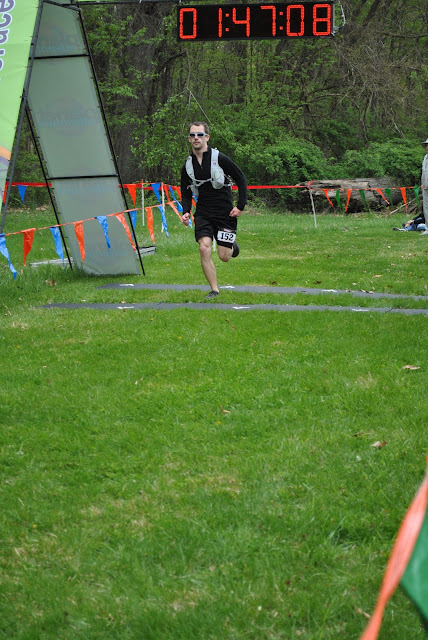 Justin finishing. Look at that concentration.

The race had a rocky start for me. Training had not gone well for either Justin or I the last few weeks and we had barely managed to get our long runs in let alone any speed training. Also, all our runs had been on the road. So, not the best training conditions for an ultra which by definition is a trail race. So we had determined to take it easy and just focus on having fun. 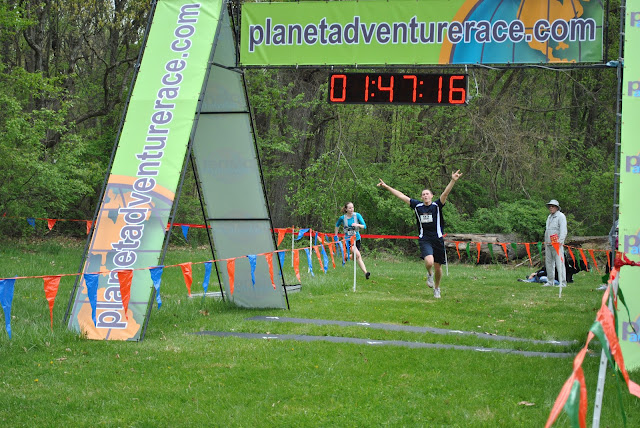 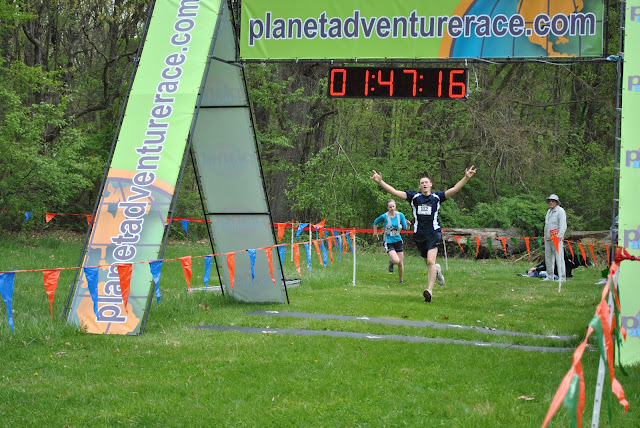 Me sprinting to the finish. I should have just passed him earlier.

Despite us trying to start in the middle of the pack we ended up farther forward than I would have preferred. The race very quickly dropped down to a single track and I immediately got seperrated from Justin. I also knew that there was no way I could maintain the pace I was running for very long so I slowed way down and allowed many people to pass me. 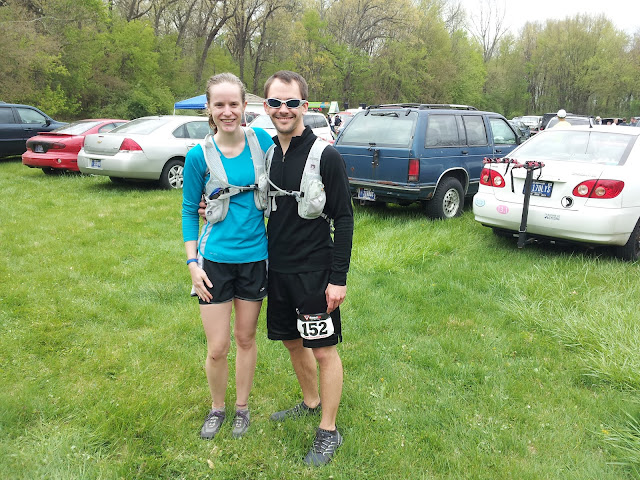 Us after the race. Victorious and very sweaty.

Around the 1 1/2 mile I had caught up to a couple of other people and several of us were pacing off the man in front. He was running a pace that felt very doable to me so I hung with him. However, by mile 3, my fast start had caught up with me and I had a nasty side cramp. I walked my way into the first aid station at 3.2 to find an apologetic Justin waiting for me. 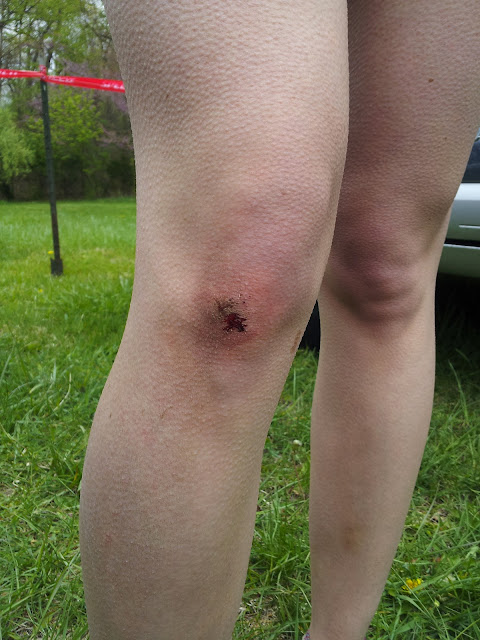 I sucked down a HAMMER Gel (nasty, chalky stuff by the way) and we headed on. The rest of the race went more according to plan. I took one fall. Truth be told, I still don't know what I tripped on. Justin says it must have been a root. I think he's being generous that I tripped on my own two feet. However!, I managed to fall to the side of the trail so that neither Justin or the two men following him stepped on me. Score one for me! 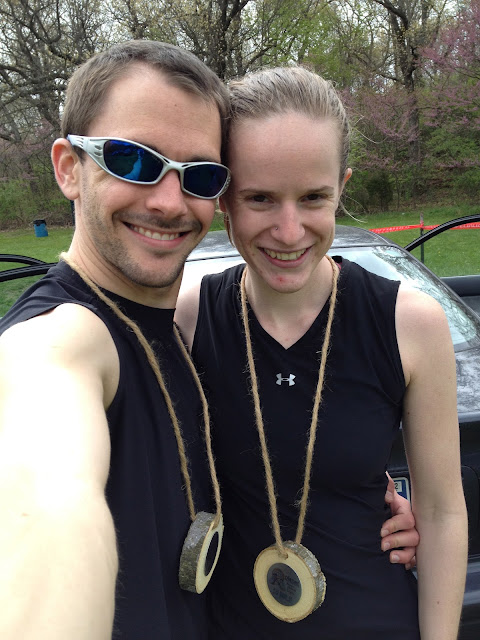 I think the biggest thing I learned from this race is that electrolytes are very important for me.  My cramp went away as soon as I took the HAMMER Gel and stayed away the rest of the race as long as I ate Shot Bloks on a regular basis. Next long run I plan to start with electrolytes and maintain them. I have a theory that this will prevent cramps from starting which I would much prefer. So, I'll experiment and see what happens. 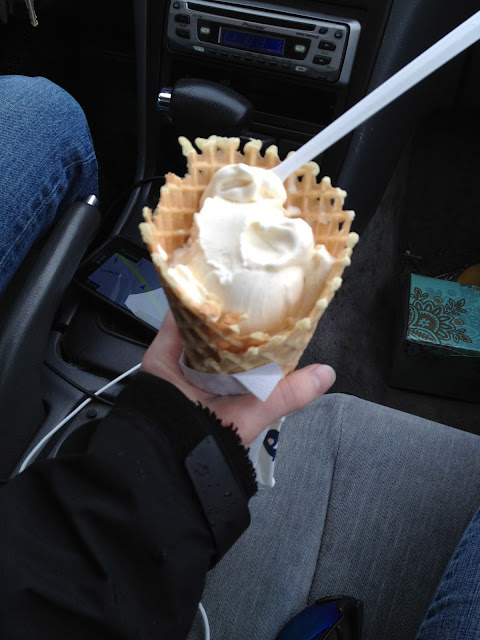 1. This was an awesome race! I definitely want to at least run the 30 next spring and am seriously considering running the 50. I know, I know, insane. At the very least, with a little training I should be able to win my age group if not place over all in women's. The fastest woman finished in 1:16:13.2. That should be doable for me with some focused training. I look forward to next year!

2. Play with the electrolytes. Figure out what works and go from there. It's very disheartening to begin a race with a cramp and feel like you're playing catch up the whole time. This is something I need to experiment with more on the regular runs.

3. The Nathan pack rocks! I love mine so much. You get used to it after a while and don't even notice it at all. For a shorter race like this that has aide stations I would definitely only fill it half way but I loved having it with me. The pack is well worth the money I spent on it and would definitely suggest it for other runners who are working to increase their millage.
Posted by Unknown at 9:00 AM No comments:

Part 6 of Why I love my small house 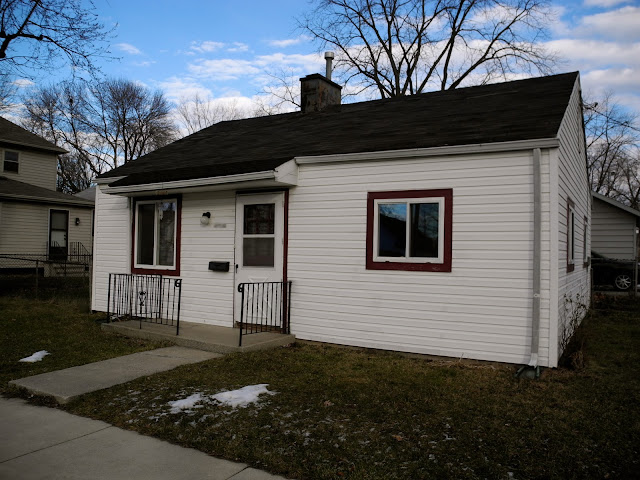 After ragging on myself and my feelings about my small (672 sq ft) house recently, I want to expand on some of the reasons why I really do love this house. This is the fourth post in a series discussing what I love about our house.
Part 1.
Part 2.
Part 3.
Part 4.
Part 5. 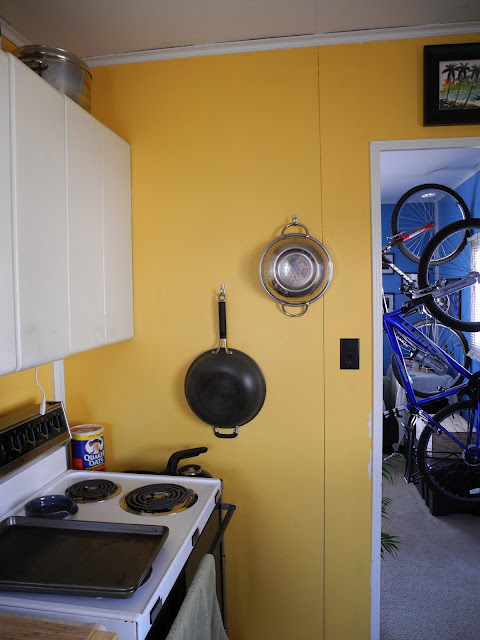 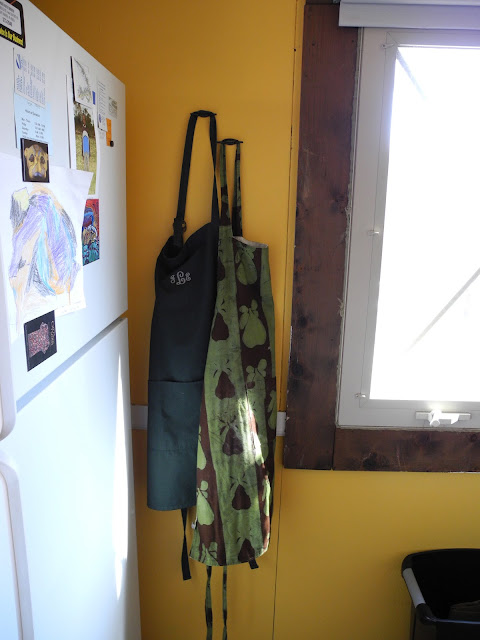 Secondly, our aprons. I love my apron. It was a gift from my mama and I use it several days a week. In particular when I'm baking. I'm extremely bad about flinging flour all over the place and this apron is a life saver. 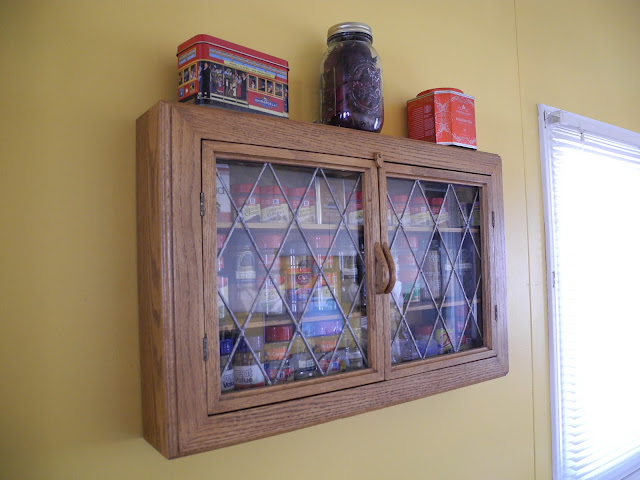 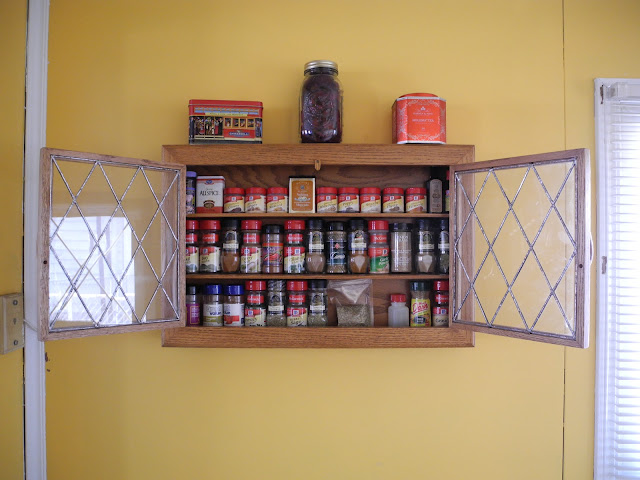 Thirdly, our spice cabinet. This is my absolute favourite thing in our kitchen. We found it at a local used furniture shop and just had to have it. As you can see it holds A LOT of spices and keeps them out of our limited cabinet space. I love the leaded glass and the way it smells when you open it. 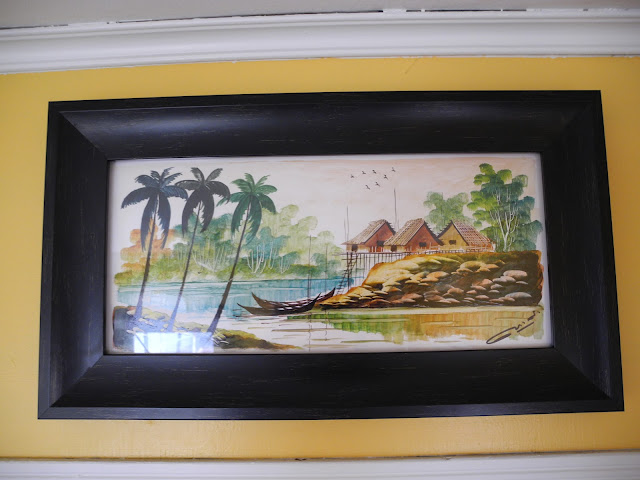 And lastly, this painting. It came from a Burmese missionary and Justin has had it for a long time. We finally got it framed and it matches our yellow kitchen perfectly!

Well, there you have it. All of the details about our small house that I love. When I started this series I thought I would cover more of the rooms and talk about the house itself more. But as I went I found myself paying most attention to the details, the things that have stories. I guess this just goes to reenforce that it really is the little things in your house (and your life) that really count.
Posted by Unknown at 9:00 AM No comments:

Labels: home, why I love my house

Part 5 of Why I Love my small house

After ragging on myself and my feelings about my small (672 sq ft) house recently, I want to expand on some of the reasons why I really do love this house. This is the fourth post in a series discussing what I love about our house.
Part 1.
Part 2.
Part 3.
Part 4. 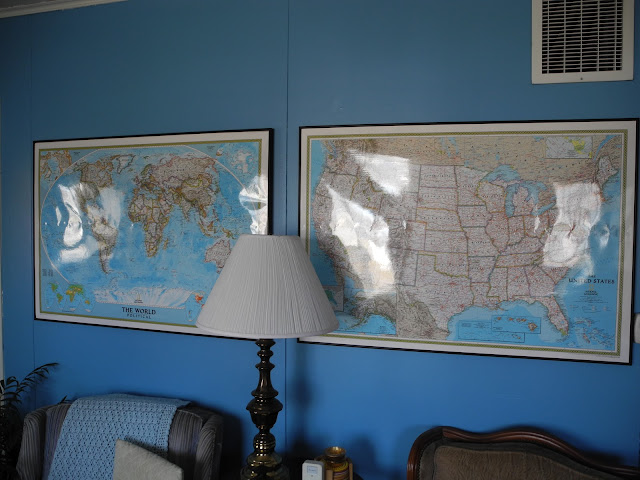 First off. I love these maps.  They're huge. They cover the entire wall and are the first thing you see when you enter the house. Someday we'd like to pin the places we've been but as we've yet to decide how to do that without damaging the maps they're unadulterated. We like them just like this and frequently find ourselves perched awkwardly in the chairs looking at them while we brush our teeth. 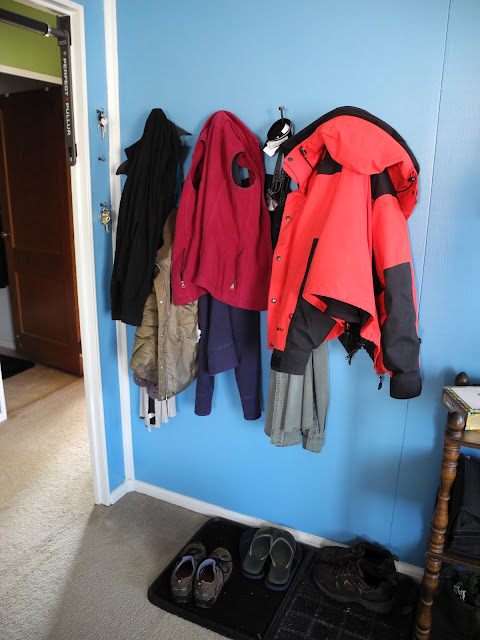 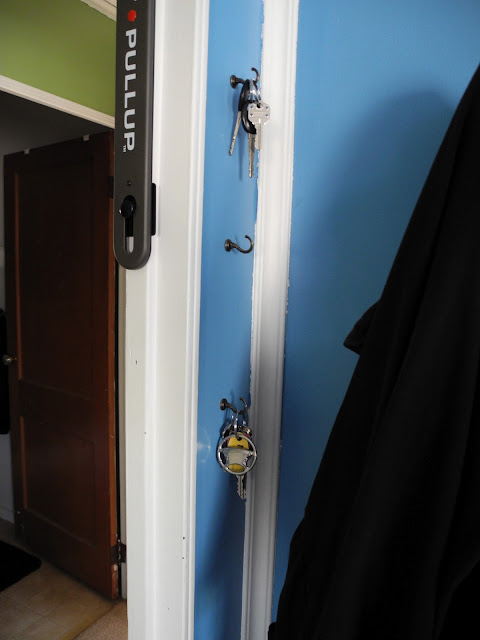 Secondly. Our makeshift entry.  These hooks don't hold all our coats and gear, we have a small hall closet that most of these items live in. But we do store our most frequently used items on these hooks. This helps alot in the winter/rainy season. The closet is too crowded to hang wet items inside. I also love our key hooks. I never lose track of my keys now that they always live on the bottom hook. Besides, it's fun to find something useful to do with that tiny strip of wall. Every inch counts! 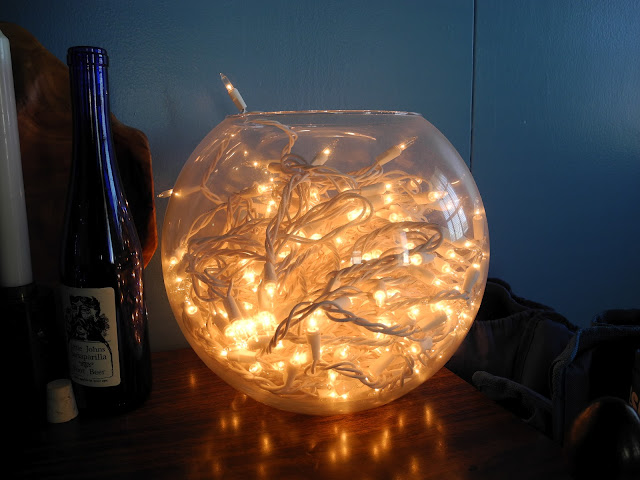 My fishbowl full of lights! I had to get my engineer husband to sign off of this one before I could do it. Didn't want to put too many lights in the bowl and melt something or break the glass. But he said it should be fine, so here we are! I love to plug these in and turn on a good cd on dark nights and just relax. 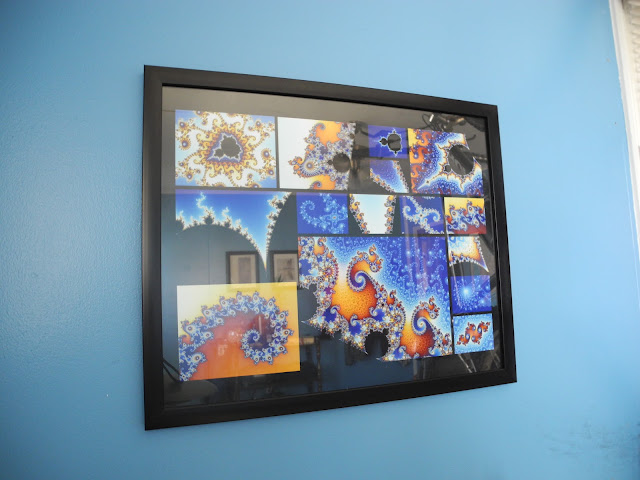 Thirdly, my Mandelbrot set collage. Justin made this for me for our first Christmas and I LOVE it! I had always wanted to hang Mandelbrot photos on my wall ever since reading about the chaos theory while in highschool and he made it happen for me. I love him. 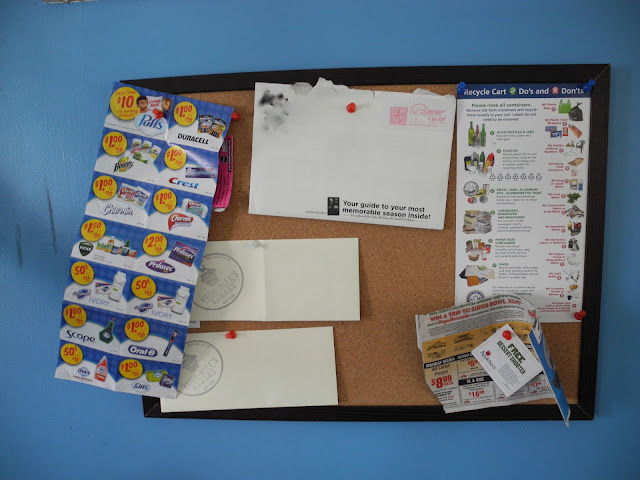 Fourth. Our little bulletin board. This hangs in the living room, just before you get to the kitchen and just beside my bike. I love the simplicity of it and how useful it is for storing things. Coupons, concert tickets, bakery gift certificates, and more live on that board at all times. Wonderfully handy. 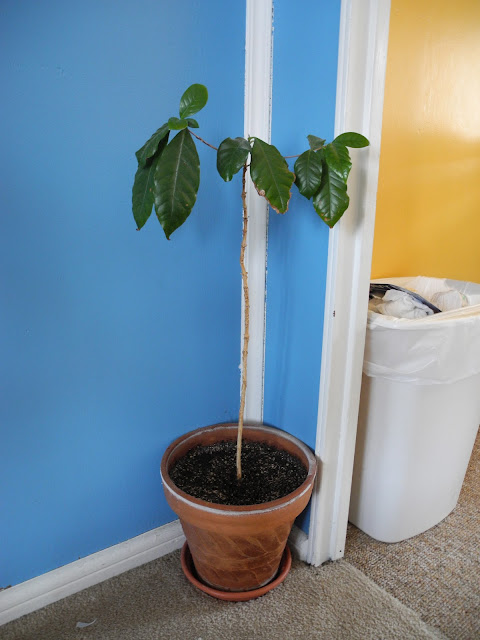 And lastly, our poor bedraggled plant. This is not our only plant. In fact, we have have four more. But this one is my favourite. It was a hand me down and it's scrawny but it's a fighter. When I received the plant it had only four leaves. And look at it now! It does take an excessive amount of watering. I typically give is 20oz every two to three days. But really! How can you not love it with it's skinny, skinny trunk and it's shiny leaves. I just wish I knew what it was!

And there you have our living room! Only one room left in the house: the kitchen.