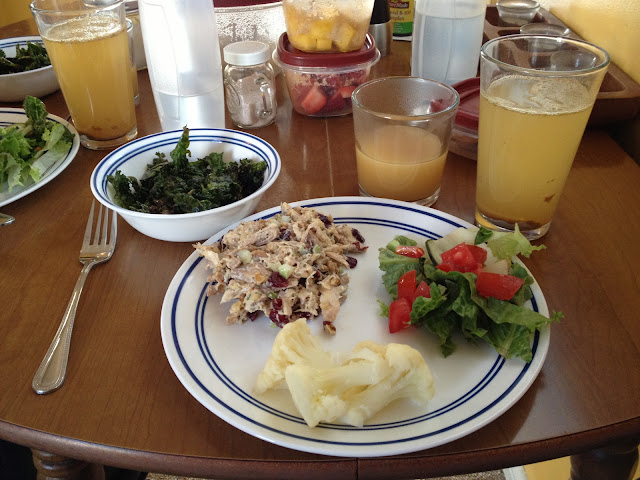 Food:
Breakfast: Banana pancakes
These are my favourite ever! I seriously wish we could just eat them every single day. Or alternate between this and eggs with salsa. That would be super yummy.

Lunch: Leftover pork burger with pineapple, and a salad
This was good. I microwaved my burger and pineapple together and the burger got a little soggy. I think next time I would actually heat my burger either on the stove top or in the oven. Something to make it a little more firm. Otherwise, it was good.

Supper: Chicken salad, salad salad, steamed cauliflower, 1 cup turkey broth
Justin made the most amazing chicken salad. It had homemade mayo, walnuts, dried cranberries, and a variety of spices. It was amazing. I could totally eat this more often. I think I like it at least as much as our normal chicken salad maybe even more. The only thing that could have made it better was fresh red grapes instead of dried cranberries. Yum.

Snack: Kale chips, grapefruit
This was our second time making kale chips but only our first time eating them. The first time they got cooked for far too long. Who would have guessed that when the recipe said 15-20 minutes at 350* it actually meant 8 minutes.We pulled them out as soon as they started smelling too done but by then it was too late. The second batch came out great though! I only baked them for 8 minutes and I stirred them at 4 minutes. They were quite good. Not as good as a real chip but they worked as a substitute and are probably something we'll throw into rotation now and again. Also, kale chips are only edible fresh out of the oven. We saved some to eat the next day and threw them away. They got limp and kind of soggy. Yuck.


Thoughts:
Another boring day. I had a slight headache in morning but was fine all afternoon. My breakfast didn't last, like always, and I was hungry by mid morning. And then I was hungry by 3:30 in the afternoon and I broke down and had turkey jerky at 4pm. It was a good day though. Felt pretty basic. I'm happy to be on the downward slope of this thing. Only about a week and a half to go.


Random:
The day during which I watched Sabrina! This was the version with Harrison Ford and I had forgotten how much I liked it. I had seen it several times when I was young and always really enjoyed it. I'm working on getting my hands on the Audry Hepburn version. Hopefully I'll find it sometime soon at my library. I want to watch it while the Harrison Ford one is still fresh in my mind so that I can compare them better.

I did still manage to have a productive day despite my movie watching. I made a batch of mayo all by myself. It really is quite easy. And super good. I think I can predict that we'll continue to make our own even after the Whole30 is over. It's just that good.


In other news, I found the remote for my radio/cd player! It had been missing for several days. I'm not exactly sure how long but I missed it terribly. As someone who listens to music almost all day, every day it was difficult not having the remote. I'm super glad to have it back!


And last, a photo of me. The light was great in our office in this morning.